To share your memory on the wall of Elmer LaPointe, sign in using one of the following options:

His father Elmer was a member of the Oglala Sioux Tribe and his mother Neva was a member of the Rosebud Sioux Tribe and Tiny was also a Rosebud member. Tiny spent his early years assisting the family with their ranching tasks. The family built a large home in the Ironwood district of the Rosebud Indian Reservation. Virginia Rose was the only girl in the family but she died just after birth. The five boys in the family were very active and raising cattle and horses did keep them busy. His parents took in the DeCory nieces and nephews and they grew up with them as brothers and sisters. Also, other family children visited the ranch to ride horses and fish in the dam. The neighbor Ben Black Bear had a large family which added other play mates to enjoy the open prairie space.

With his brothers, Tiny attended the St. Francis Indian Mission School and graduated when he was 16. After his graduation he worked for a time at the Paulhamus Store in Rosebud.

Tiny was married on January 14, 1967 to Carolyn Manuel who was from the Pima Indian Reservation in Arizona. She earned her LPN Nursing degree from Stuart Academy in Arizona. She then engaged in a nursing career with the Indian Health Service and retired from the Rosebud IHS Hospital. They raised three children: Mary, Galen and Perrin (Damon) LaPointe.

He attended National American University in Rapid City, SD and graduated with an AA in Business in 1969. They moved to Aberdeen in 1970 where he was employed with the BIA. In 1974, they moved back to Rosebud and he worked as a grant writer for the tribe until he retired due to back issues. He also maintained his ranch in Iron Wood until a prairie fire in 1988. In his spare time he did enjoy golf, fishing, crossword & sudoku puzzles and grilling for everyone’s birthday celebrations.

Tiny spoke with a soft voice but when he told a favorite story it was loud, clear and with a big laugh. As the family historian he would visit with the Lakota elderly to collect family facts and events. If you needed assistance you could count on him to give you his full support. He will be remembered as being friendly to all, generous, humble and very respected. In his later years his main goal was to provide guidance, spirituality and fiscal help to his grandchildren.

Elmer is survived by his daughter Mary LaPointe and her son Shane LaPointe; his son Galen LaPointe and his children Ashley Menard, Leslie LaPointe, Kristin and Gimimila Douville, Blaine LaPointe and Manuel Douville; great grandchildren Rylan Quick Bear, Talulah Lasley and Kenneth and Michael Chase LaPointe. Other survivors are his many family members and friends living on the Rosebud and Pine Ridge Reservations. Tiny enjoyed telling family funny stories so his survivors are going miss laughing with him.

To send flowers to the family or plant a tree in memory of Elmer Clement ""Tiny"" LaPointe Jr., please visit our Heartfelt Sympathies Store.

We have provided a digital copy (PDF) of the Memorial Program that we supply at the time of the service. To Download this file please click the filename below.

We encourage you to share your most beloved memories of Elmer here, so that the family and other loved ones can always see it. You can upload cherished photographs, or share your favorite stories, and can even comment on those shared by others. 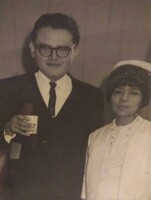